It's been an extremely busy week, packed full of activities every day. If I had to choose a favorite, I think it would be our stop at Gruene on Tuesday. It was not planned and a pleasant suprise. Wednesday we were picked up by a tour bus at 8 in the morning and didn't get back until after 5pm. 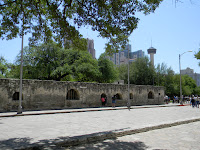 There were lots of stops on the tour and lots of walking. Included on the tour was the Mission San Jose, Japanese Sunken Gardens, Buckhorn Saloon and Museum, Texas Ranger Museum, The Alamo, Mission Concepcion and the Mexican Marketplace - El Mercado. 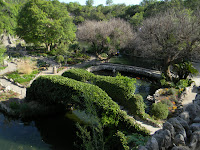 We were so packed full of facts and figures that I couldn't begin to retain it all, much of which I took notes on, and I won't bore you with all that here. The tour also included a boat ride in the river downtown by the Riverwalk. 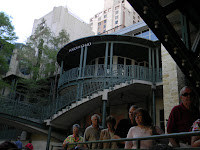 It is mainly a hotel district, packed full of shops, restaurants and bars, but the architecture and historical buidings are supurb! 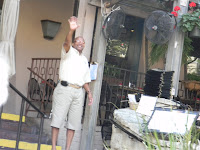 If you want to learn about San Antonio History I would highly recommend doing it this way. The Buckhorn Museum had tons of animal mounts and pictures using rattlesnake rattles. Bonnie and Clyde's car, complete with death certificates and bullet holes. 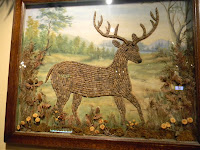 We had time on our own and stopped at the Buckhorn Saloon for a quick bite and I know we didn't see everything there. The tour bus driver was very knowledgeble and made the day fun. Thursday we got up early again and headed down I 37 to the southern Texas Coast. 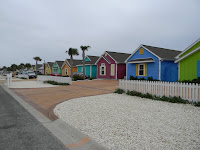 We drove on through Corpus Christi and stopped on Padre Island for lunch at a place called Snoopy's Pier. It was by recommendation of a friend and turned out to be a good one. 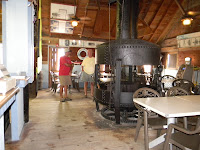 The shrimp and fish was melt in your mouth good and we had an added bonus while dining out on the deck to watch the Blue Angels practice their formations getting ready for an air show. 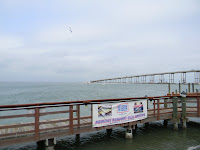 The skies were overcast and the wind was really blowning so the day at the beach didn't turn out to be a good one. 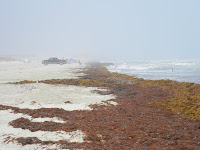 We drove by Mustang Island State park and out onto the beach itself. Drove up the beach a ways and continued up to Port Aransas, where we took the ferry across to the town of Aransas Pass. With the weather not cooperating, we decided to return to our home base at Elmendorf rather than stay in a hotel for the night. 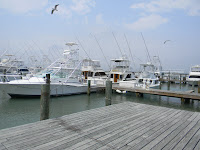 I had packed and prepared, but was just as happy to make the drive back to the coach. 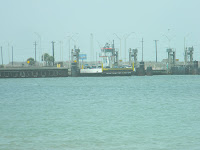 I still really like my own bed! Friday was another driving day, only this time we headed Northwest of the city, to a town that boasts to be the Cowboy Capital of the World! Now we ate some pretty good Texas BBQ there, and browsed through some western shops right downtown. 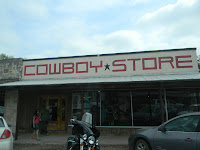 The town of Bandera, with a population of less than 1,000, has lots of older buildings and homes and has a Frontier Museum with a carved totem pole in front, but I cannot see where they can claim that title! 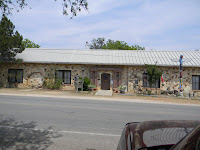 I let DH go for the two hour museum jaunt, and I kept KayCee company outside and in the car. When DH returned he couldn't really give me any facts or names of famous Cowboys to remember, and they didn't have any printed material so that was that. 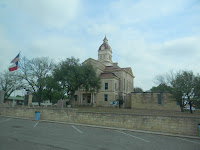 We left some of our money on Main Street though, after lunch, he bought a pair of shoes and a hat stretcher in one of the western shops, so all was not lost. Today was a regroup day and we went to Wally to stock up, spotted a detail place across the street and had the Suburban Detailed and Waxed. Now that is done for the summer. I am doing laundry and tomorrow morning we will pull into a self serve truck wash and attempt to wash the dirt off of this coach. We will only travel about 100 miles tomorrow and meet up with a friend of ours that is crossing our path. I made reservations today in Savannah Georgia for the 9th of May, so now I have a goal to achieve! We wil bid San Antonio good bye for now, and I know there's lots more to see on a future visit.
Posted by mskayndan at 3:27 PM 3 comments:

The saying is "Everything is Bigger in Texas!" Well, I want to change that a little to "Everything is Faster here in Texas!" The wind that we traveled so hard to escape got here about 10:30 yesterday morning, and it was no day to go sightseeing or be outside. We took the opportunity to regroup, study some brochures and get a plan for the rest of the week. It blew about 40 all day and finally started to settle down here about 8:00 last night and it wasn't a bad evening when the dust settled. We lucked out and met a lady at the office that walks and cares for dogs here in the park while their pet parents tour the city so we got on her short list. We will be taking a trolly tour of the city and the high points, including the Alamo and River Walk downtown. 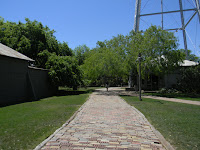 Today we headed north into the hill country and stopped off at Camping World in New Braunfels to pick up a couple things that we've been looking at. We purchased an Electrical Surge Protector for the coach. I've been wanting one since the beginning that and decided with all the strange campgrounds and Parks we will be visiting this summer, it would be a good idea to be safe. We took a few minutes and looked at several new Coaches and small Camper Vans, since I have decided to start planning our summer in Alaska for 2013. I know for sure we will not take our coach up there and I want something small, efficient and economical. That took the rest of the morning and then we continued on to the little town of Gruene, which turned out to be a very pleasant stop. 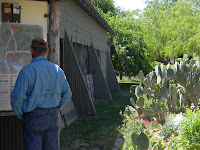 The Gruene Historic District At the Water Tower was born in the 1840s when some German Immigrant Farmers arrived in New Braunfels to find very little acreage available, and therefore purchased land down river. They ended up being Cotton farmers and thus the town of Gruene. A large Brick Victorian home now stands as a B&B, a mercantile store was built in 1878 and a Cotton Gin powered by the Guadalupe River was added soon after. 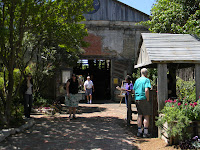 The original burned in 1922, and was replaced by an electric model. It now houses the Gristmill Restaurant and Lounge where we had lunch today, out on the patio. 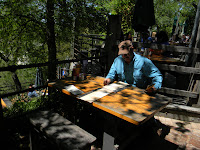 Another Building, The Gruene Hall, is the original Dance hall that has been the venue for many many famous musicians and has served as a movie set in the 1960s. 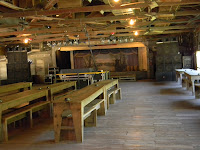 Most of the businesses in the town did not survive the Great Depression, but the Hall never closed. We looked around and poked in and out of a few shops, where I found my Texas Hat pins for the collection. 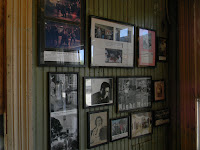 Yea! Now that's done I can focus on other things tomorrow. We made our way back to the park before rush hour. Everyone is moving at a much faster pace around here! Seems like I need to ramp it up a bit after kicking back all winter. 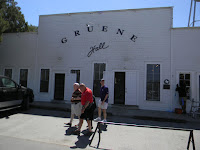 In Whole Foods I got ran into by a grocery cart this morning that was in way too big of a hurry. Geeze!!!! We have to be up and ready to hop on the trolley at the office before 8 in the morning, so I better get around and switch to touring gear! I'm wearing my running shoes! Thursday we will leave for Corpus Christi for a couple days of beach and water. So my week is booked pretty full. Stay tuned!
Posted by mskayndan at 6:36 PM 1 comment:

We Made it to Texas

We are in San Antonio! Yippeeee! We got here a day early, because there was high wind warnings for the Southwest part of Texas and we didn't want any part of that, so we did something today that we never do! Drove 451 miles!
Posted by mskayndan at 9:29 PM 2 comments: