From Quartzsite to Mobsters!

In the morning we will be starting another great week here at The Palms. Mr's back is a bit better. We got out of town on Tuesday and travelled to Quartzsite to visit some Escapee friends that are parked in the desert for a bit.

Quartzsite is not just a town, but an experience! Every RVer needs to go there at least once.

It is a city in the desert of every type and size of RV gather in the desert to attend a large tent swap meet and RV show. Our friends were parked south of Q, and we left here at daybreak to make the 75 mile trip. I catered them breakfast. Took them Breakfast Burritos made from scratch.

This little plane was handiwork hung in the meeting tent. We have some talented members in the group. Mr. IYQ carves and whittles and is working on a beautiful recipe box.

We went into Q for lunch at the Palo Verde Restaurant and walked around some of the booths and displays with another couple.

I tripped over a curb and fell on my face, so have been nursing my scrapes and bruises the rest of the week! We were looking for a certain ice cream booth, and we found it. After all that pain, I wasn't going home without some!

After a little more browsing, we made our way back to where the wagons were circled, had a wonderful visit and potluck supper.

Topped the day off with stories around the campfire, then hit the trail back to our home on wheels in Yuma.

Wednesday we did some touring and sightseeing up around Martinez Lake and had lunch at the Marina.

In the afternoon we drove the loop to the Imperial Dam, checked out an RV Park and Golf Course and back to town.

We drove through some U.S. Proving Ground territory, watched some parachuters and heard some very large guns being tested.

It's great to watch our Aircraft and Soldiers work and the equipment displays are awesome.

Thursday we drove around to look at Real Estate and Friday was a rather full day as we spent a few hours at the Arizona Marketplace.

Great food vendors, complete with live music. It's fun to watch people eat hot dogs and dance at noon! picked up some new patio chairs and in the evening we attended a Mobster Dinner and Dance here at the resort.The Service group here served us a yummy speghetti dinner. A good time was had by all!

Saturday we went to a Model Home Open House and I won a 32" TV!

Today we decided to go the the pool and relax, the sun was out, but by the time we got over there, it was gone.

We sat out for a bit, got in the hot tub a few times, showered and came home. We're ready to go for another week.

DH's back getting better. Hope he gets healed up enough to play golf soon. If the weather is kind to us, we will make another trip to Quartzsite to attend the big Tent RV Show.
Posted by mskayndan at 9:04 PM No comments:

The Arizona Sunshine is Missing!

The Arizona Sun has taken a real break. The past few days, today included, there's nothing but clouds. The smell of rain showers is strong, but not many sprinkles make it to the ground.

DH has been convelescing and making trips to the chiropractor every other day or so. The ho-hum of winter in the desert is upon us! Thursday night a bunch of us went to Parrish's Pub for Fish n Chips.

The fish was really good and the wait staff was awesome, as they don't take reservations and when our whole group got there, we ended up with 17 people! We stopped at the Quechan Casino the other day on the way back from Mexico and picked up tickets to a concert Friday evening.

Its stars were Country Music Greats Sammy Kershaw, Joe Diffe and Aaron Tippin. They had a really good show and didn't just stand and sing, they talked about themselves, their careers and songs,told jokes and saluted our Veterans. Aaron Tippin just returned from Afghanistan.

He has made a dozen or so trips to Iraq and Afghanistan to support and entertain the troops. He usually goes to a war front on Thanksgiving to spend it with the soldiers.

A very admireable thing to do. We have seen and talked to him while he was fueling his bus at a Flying J in Nebraska a year or so ago, and he even drives his own bus! Just a real down to earth guy, he said "It breaks up the monotony of the trip!"

The pictures that I got of the concert, I apologize, as they aren't the best. It's been too cold for pool side or hot tub activities and I've just been in a mood to have something warm in the oven or in the crock pot and snuggle up under a blanket.

Today I'm baking cookies to take to the Escapees Reunion in Quartzsite on Tuesday. We are heading to the desert to a sea of rigs of all kinds, and this year's meeting of the class of '08 friends. Should be lots of fun.
Posted by mskayndan at 2:38 PM 1 comment:

The First Time in Mexico

We had a wonderful New Year's Eve and New Year's Day with good friends. We laughed lots, had lots of great food and drinks, listened to good music and even danced our way into 2012! 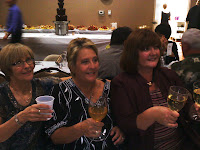 The hubby was wanting to go into Los Algodones and check into getting a new top denture made, since a few of our good friends here had gone to a particular dentist and they were pleased with her work....and her prices!

The same thing with eyeglasses. Me? I have been skeptical and apprehensive toward the whole idea from the start!

Then I finally decided that if we could go with those who had been doing it for years, it may be good for a distraction, and at the best, DH will get fixed up. When your insurance doesn't cover these extras, it is nice to get some good work at a reasonable fee. So last Wednesday we embarked on the day's adventure about 9 and followed our friends to the Quechan ran ($5 on the way out) parking lot on the American side of the Los Algodones Baja California Border Crossing.

You park there, and walk through the gates and down a sidewalk around the Police Station and right down into the town Square.

The streets are lined with Vendor's booths....a Corner Plaza, where benches and restrooms edge the area where a Native American man sets up and plays the Flute. One Cart sells frest Asparagus and Frest Shrimp on Ice....some of the biggest shrimp I've ever seen, and they were $10 a pound.

We walked a couple blocks and through all the vendors and store fronts, there were many Dental and Optical Associates handing out cards advertising their services. Lots of souveneers, clothing, purses and belts. Accessories of all kinds for both men and women. We passed through all that browsing for the first while and right to the dentist office about 2 blocks away.

Mixed in amongst the vendors were booths and small cafes set up to sell Quesadilla, Shrimp Tacos and Margharitas.

Pharmacias every other store front offering lots of generic medicines that are very common to us in the U.S. and Canada for a very low price. The other bonus is that for anything but Narcotics you don't need a prescription. On Thursday we went back for his fitting and we stopped in Best Optical and he had an Eye Exam while we were on a roll....picked out two pairs of glasses, since they had a sale, buy one get one free. Also by the Pharmacias, there were discount Liquor Outlets, Cigar and tobacco Vendors. The first day we had to stay later in the afternoon and the line to get back across the border was really long.That wasn't to my liking, but we visited with some nice folks while we waited.

We probably were in line an hour and a half, but the second and third days our appointment was earlier and we were back across the border before noon, no lines no waiting. On Friday we were back over to pick up the Denture and Glasses...and I gave in to get a t shirt, very colorful jacket and an "ugly purse" according to DH. Let it be known that I like my "Ugly Designer Purse!" It has been cooler here this weekend.

The Border Patrol is really on the ball and they are guarding our Border Crossings. Homeland Security is very efficient and diligent in examining passports upon passing through the entry building returning to the U.S.

DH is down for the count.... his back started acting up before we started the trips to Mexico and it has gotten pretty bad.

He's made 3 trips to the chiropractor and basically is laying around on ice and walking a very small amount. It will just take time as usual, so there won't be any hiking trips scheduled in the next week or two! We had a couple of salesmen show up here on the street and knock on the door this morning with a brand new 2011 42 ft. Monaco Diplomat for us to look at. Nothing like Doing nothing and they bring the units to you!lol Actually I had walked over to our Mini RV Show on Saturday in the parking lot and visited with them while looking at another used unit. I guess they are trying to find something I like! Both of the rigs had some features that I really like and in seeing our rig, offered me a pretty good price, so the trading won't be out of the question, but I'm not flat in love with what I've seen...so they still have to win me over! Just calll me Picky and Foofy! :}
Posted by mskayndan at 8:54 PM 1 comment: