Whiskey Richard and the Halloween |Party

Ventured up to Broken Bow Nebraska on Friday to attend a Halloween Dance that featured my son's band...Whiskey Richard. 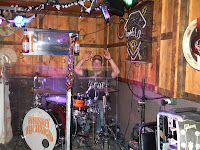 He is the drummer, and since he has been with that band, I haven't heard them, nor met two of the newest members. They play 70s, 80s, and 90s hits and sound really good! 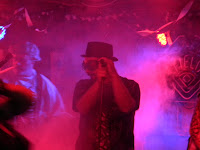 I thought it would be appropriate and typical to just show up...however, beings it was a costume party, I thought I could use the opportunity to go in costume, and suprise them! I was on a secret mission, and it was fun.It's probably been 15 years since I have donned a costume and went out, I haven't lost the touch. Halloween used to be my favorite holiday! 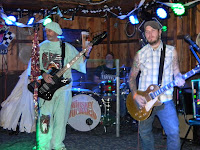 Well, it worked! The look on his face was priceless when he figured out it was me. I got hugs from all of them, finally met the other two guys,we all had a really good time and I stayed up way too late! 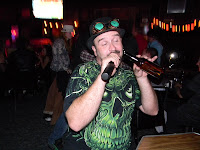 Lots of people were dressed up and they judged the costumes at the end of the night. I met some new friends....one of the girls took some good pictures of us and I will share them when I get them. 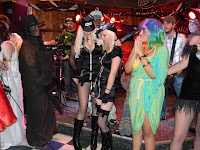 I posted an album on Facebook this morning too. I stayed in a motel because I have pretty much given up driving on the highway after dark. 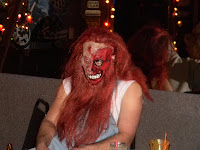 The rest of the weekend was spent with family and hunting season opener. Domestic Engineering isn't always an easy job. 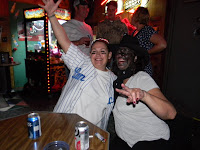 I spent the day yesterday shopping to replace some items that have broken or quit working..it's amazing how when one issue presents itself, there will usually be two more! I have a new pan, a new bedroom tv and a new living room chair! That all quit Saturday in 6 hr. period of time. Was a rough weekend on possessions. I'm just thankful it wasn't the refrigerator, washer or dryer! 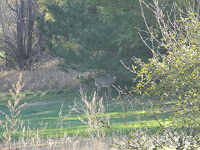 When I walked out on the deck this morning, I caught this deer munching grass on the golf course just past my back fence Was lucky enough to catch a picture of her. The rest of the day I will spend playing catch up and rest up.
Posted by mskayndan at 2:08 PM 2 comments:

Where did it go?

I really don't know where the month has gone, but here it is, the last weekend in October! A lot of the last couple of weeks has been spent - 1. On the road home 2. On the road after we got home....so basically in a vehicle. There is a saying, "Busier than a one armed paper hanger" Well I have a friend in Canada that I converse with through e mail everyday and I swear.... we've been passing that little paper hanger back and forth. I made a grave error for the blog however, in that I left the USB cord for my little camera in the coach in Arizona. I have tried several others I have and they don't work! So for a couple months I won't have pictures to share unless I use my other camera or my phone camera for something. There's always an abundance of things to do when we get here to the sticks and bricks in the fall. We have been busy with those. I was even called a "Slave Driver" one day! I got a new range hood installed, fall bushes planted in the front yard and one valve in the shower replaced. Several more things on my "Wish list" that I have a feeling will be next year's projects. KayCee and DH have been riding around the country every day securing places to hunt pheasants and getting some exercise. My oldest son came from Colorado Springs last night and his first Tank Commander in Iraq came from Lincoln, NE where he is now a recruiter. They met here and will spend the weekend hunting birds with DH and having a nice visit. I don't think they've spent much time together since Iraq. This is the first year in 35 that when Pheasant Season opens at daybreak tomorrow, I won't be here. I have a date at a Costume Party tonight in Broken Bow Nebraska....shhhhh! It's a suprise. Oh boy, will it be a suprise. Stay tuned....I'll let ya all know how it turns out! This next month is going to be super busy. I think I need to ship the little paper hanger guy back to Canada to bug Jan for a while but she suggested that I send him to Colorado to scoop snow and that would keep him busy for a while! What ever works...I just need a breather. We are still waiting for the firt storm of the season. We've had two or three hard freezes so it's only a matter of time now.
Posted by mskayndan at 11:22 AM 3 comments:

Fall in the Desert

We arrived here at our 2nd home on October 1st. It has been beautiful weather, 80s in the daytime and 50s at night, until this past week and it climbed back up to 100 every day and just gets to about 70 at night. Unseasonably warm for the second week in October, it's just regretable that we couldn't capture that and bottle it up for the second week of January when we sit around with coats and long pants on!

Betsy got a much needed bath form Dave's Auto Detailing and we got busy and gave her a complete rub down with Dri Wash and Guard, and all the maintenace issues are done for another season. The oil and lube job for the year was obtained at the Freightliner Shop in Flagstaff on our way across the top of Arizona. 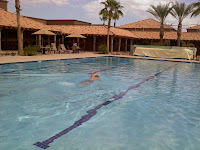 We are finally getting our ducks in a row to leave this paradise on Monday and return to the land of corn and pheasants. The freezer is empty and defrosted and the last of the laundry was done this morning. I have made up my mind not to tote hardly anything back this time. As I look around tonight, I think it's matter over mind instead of the other way around! Many little piles to get loaded. So I may have to do a second ditch effort to pare it down! I have been really good about going to the gym every day, walking two miles on the elliptical and lifting on the weight machines every other day. We have enjoyed floating in the pool and sitting in the hot tub when we thought the pool was a little too cold! We both have had our flu shots, KayCee had her vet visit and she's caught up on her boosters.

They are walking in the desert every morning to get in shape, or DH walks and KayCee runs. We have an irrigation ditch right behind the park, currently running pretty full, and this morning, KayCee thought she would get a drink and she went over the edge and slid down in! Scared her, DH was ready to go in after her, he said she did swim in a circle and her long nails saved the day! She climbed back out, and he said he don't think she'll do that again. DH has been hitting the golf course pretty steady. A couple from Montana that we know showed up and we had a nice visit. They brought their coach down here and went back home on Wednesday. Now they will come and go all winter too!The guys went golfing a couple days and we had fun at the pool. They met up with some Airforce C130 technicians that are on rotation here for a few weeks with their planes...they have golfed with the old guys a couple times. Every day we watch the jets fly, the Ospreys and Helis do their manuevers and drills. I never tire hearing it or watching them take off and land.

I would much rather listen to them in the air than the sirens that pierce the early morning quiet and jolt me awake. Must have been a wreck up on the Interstate this morning. We went for another long walk around the park tonight after supper. It was still really warm. Every day there's more folks showing up. When we got here there wasn't hardly anybody here, which was kinda nice. It will just get busier and busier from here on out.

There's quite a lot of construction going on and it's really bustling during the day. The Grounds keepers are busy pruning, fertilizing and getting things spruced up for the winter visitors.

This park is completely full for the month of January. We have tickets for some shows that will be happening when we return here about Christmas time. I'm looking forward to seeing family and enjoying some cooler temps for a while, but will be ready to return here to our oasis in the desert.
Posted by mskayndan at 9:01 PM 2 comments: