End of Summer! Back to where we started


It has been a very different summer for us, in that we have been on the move more than ever before! Lots of changes in plans...the jello that are plans are made of got stirred and stirred again. 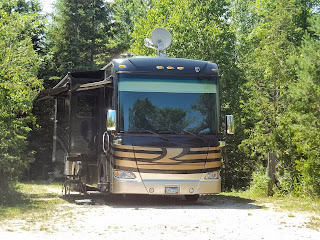 We travelled many miles this summer, with both vehicles and then a side trip with just the car. I haven't added up the miles and the fuel gallons yet. Save that heart attack for later this winter when I don't have anything else to do. I knew that this summer and next summer were going to be the heaviest travel years yet, however I didn't realize how physically taxing it is to be a non stop tourist! :} When we started the summer we spent the month of April in the Texas Hill Country. The first stop was at Kerrville, and we attended the United States and Britain Sporting Clay Championships at San Antonio. Then it was on to 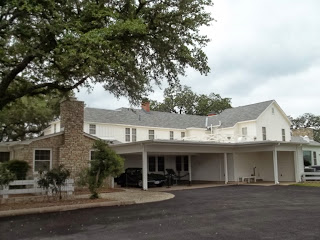 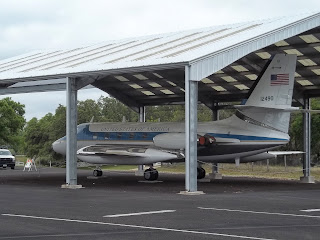 Fredricksburg, where we toured the LBJ Ranch and Stayed next to the Fredricksburg Airport at the Lady Bird Johnson RV Park. I learned a lot about him as President and the Power of the President on a working ranch. Pictured here is his Ranch house and Air Force 1/2...right outside in the Driveway! Who knew he had a full airstrip right out in the pasture! 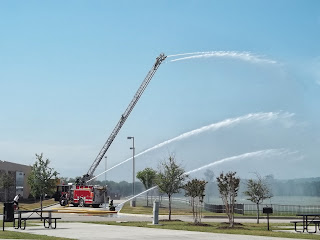 We Spent some time in Thackerville Oklahoma where they have a beautiful new RV Park and the 2nd largest Casino in the world. DH enjoyed having the area Fire Department right across the street from our site, where we had front row seats to their training. While there we got tickets to a Doobie Brothers Concert. It was great! 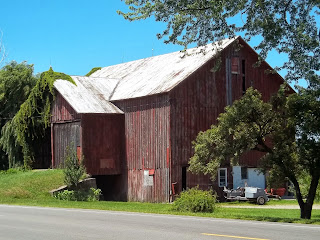 In the latter part of June and July we wandered about in Michigan, up the coast of lake Michigan and had a stop at the Little Sable Lighthouse point, the destination where our Oldest son got married. 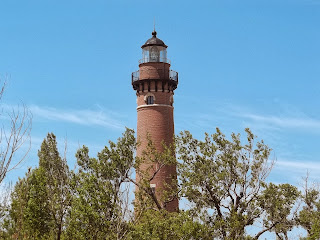 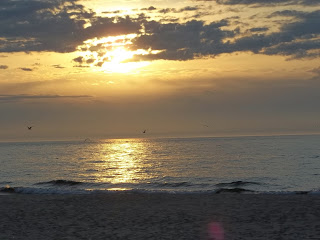 With the price of Diesel being up this summer and  the large amount of miles that I planned for us to go...once we landed up in the Upper Penninsula of Michigan on the Whiskey Bay of Lake Superior, we left our Coach and headed out back south and around to the west into New York, with stops to see Niagara Falls, and beautiful destinations clear across the rest of the country through New Hampshire, Vermont and Maine to the town of Bar Harbor where we had Lobster Rolls for lunch and 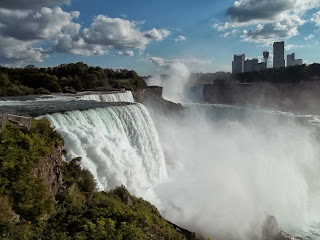 sat and listened to the roar of the sea at Thunder Hole. A spot that roars at certain times according to the tides. 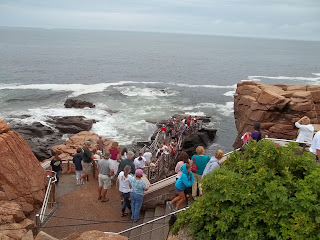 From there we ventured on up into New Brunswick where things are a whole lot different. Signs for Wildlife are lots bigger and all the speed limits are in Kilometers! 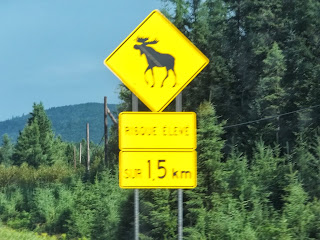 We drove across Quebec, Montreal and Ontario in Canada and Stayed in Several cities. We stayed on the border of New Brunswick and Quebec, and then drove to the outskirts of Montreal. 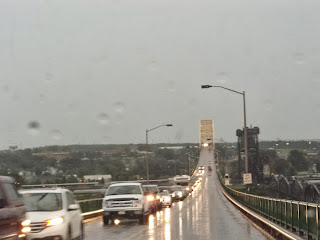 Passing through Toronto, we re entered the USA at Sault Ste Marie Ontario, two very weary travelers and one very weary dog! 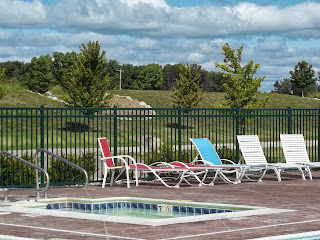 On leaving the Upper Penninsula we meandered back down to Grand Rapids and spent a couple days looking around. Visited President Gerald R Fords museum, Library and Burial site. 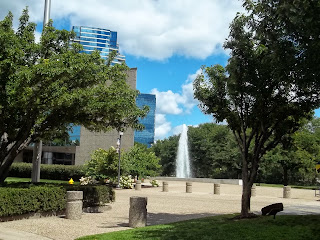 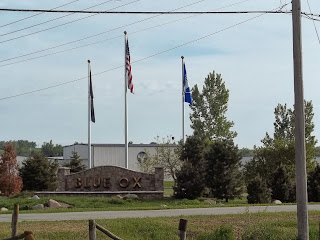 The Blue Ox facility was a stop over in Pender Nebraska on the way to Indiana this spring. The return trip this fall was capped by a stop over in our home state where the faces of the Presidents are majestic. We had several majestic visits while there. Our RV Park around Rapid City South Dakota is the Happy Holiday RV Resort. 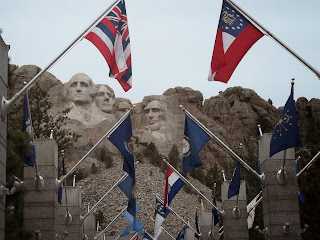 It is right across the street from Reptile Gardens...and along with the beautiful flowers we attended some of the Reptile Shows too.... he's pretty majestic! 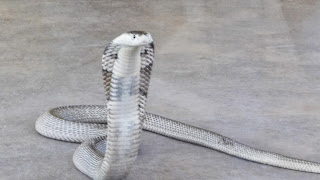 When we stayed up at Brimley in the U.P. the city that we did most of our shopping at was Sault Ste. Marie Michigan. We found the Sault Locks where all the Commercial Ships pass through the Straits from lake Erie and Huron to Lake Superior and back. It is very interesting and we spent several afternoons watching the boat traffic. 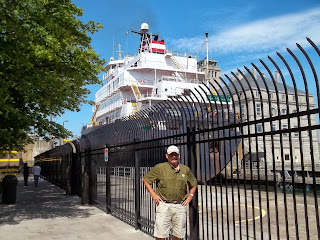 The views in the Upper Peninsula are awesome and I would definitely return. The weather was fantastic and we met many really nice people. Our park in Brimley was across the street from a nice casino, next door to a great golf resort and our neighbor had a boat at the bay and Dan went fishing with him quite a bit. They played golf three times a week. 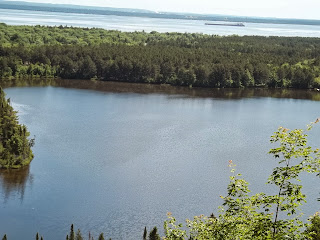 After we left Michigan we retraced the route to Indiana and drove across the bottom of Minnesota to South Dakota.

With the summer winding down, we made our way across South Dakota with a few stops, Mitchell to see the Corn Palace, The Wall Drug for free ice water! The old 1880 town west of Murdo....where lots of memorabilia from the movie Dances With Wolves is located. We travelled through Wyoming to I 25...stopping at Buffalo and KayCee to visit Chris LeDoux's Memorial Park and stopped in Casper to visit with some friends who are tonight sitting in 20 inches of snow! We headed on South to Cheyenne in the rain right after the great floods in Colorado. It was a waiting game and a guessing game as to whether we would try to go around Colorado to the East or Right down through the Center of it all.... by the time we got ready to go, it was decided to take our chances with the big highway and the evidence of the severity of the Colorado situation presented it's self when we got down around Ft. Collins and Loveland. 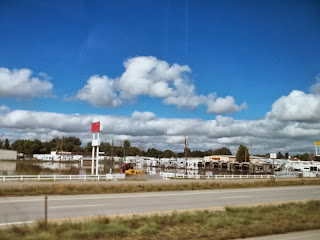 ﻿
﻿This RV Dealer has major problems and those rigs were mighty wet. Our heartfelt good thoughts and prayers go out to all of those affected after that terrible crisis. My jello got stirred once more because I had full intentions of taking a drive up through the Colorado Mountains, visiting Estes Park and the Elk on the Golf Course. The closest I would get to an Elk this year is this highway sign! 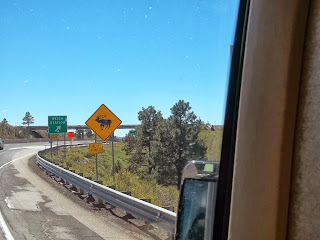 Two weeks were spent in Fountain Colorado...where I caught up on some laundry and rest and the other half went and played golf at Castle Rock and Country Club Colorado. I'm always reminded of the sacrifice that our Service Men and Women make to keep our country safe when I am right across the road from Fort Carson. The Army Post that my son called home when he was in the service. A couple of the rigs in our Resort was the home away from home to some of these soldiers. They, to my delight had some 4 legged friends that they tended and kept them company. It warms my heart that they train to kill and train to survive and they have the hearts to care enough to own a pet during an unsure time. 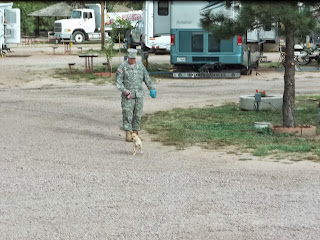 We began the trek south on Monday... we have made a stop in Raton and we are currently in Deming New Mexico. We have a Maintenance Appointment at Tucson to get the Coach ready for winter. We will spend a week there and move on to Yuma to put things away from the summer and fall and move on into winter...... Stay tuned!