I apologize for the lack of photos...having difficulty here but will post them to an album in Facebook.... enjoy!  www.facebook.com/kfbrown 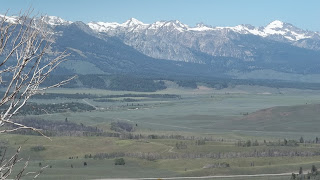 We said goodbye to extreme heat in the desert and travelled north on I15, stopping off  in Springville Utah for a couple days to cool down and regroup. That area is just south of Salt Lake City, very heavy traffic, and tons of road construction. We couldn't even determine where to be most of the time, there were so many orange cones and barrels! The trip north from Las Vegas took one very long hot travel day, but I was determined to get up out of the heat! My plan was to stop along the way and see Bryce Canyon and Zion National Park, but with forecasts of 119, I said we'd take a raincheck! We left there and scooted on north through Salt Lake and after leaving the city behind, we had an easy day's ride to Heyburn Idaho. We have spent the weekend exploring southern and central Idaho. 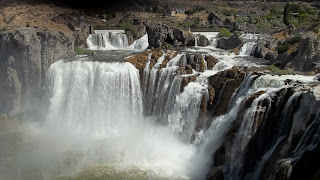 Friday we spent viewing the Shoshone Falls, Perrine Bridge and Snake River Canyon. Shoshone Falls are higher than the famous Niagra Falls. We were lucky to be here when there was high water. This weekend in Burley is the 37th Annual Idaho Regatta on the Snake River. We walked down by the river in the afternoon and watched some of the qualifying rounds of the racers. We missed seeing some of the best and biggest racing boats in the world, but its a choice of which beautiful thing to spend your time with! 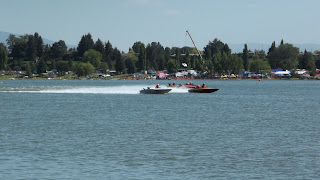 Large crowds are not my favorite thing anymore either. Too many things, too little time. Saturday we covered a loop of about 500 miles, heading north to the Sawtooth Mountains, Sawtooth National Recreation Area, Sun Valley Idaho and the Wood River Valley. A beautiful place, many awesome houses in Sun Valley, but I was not taken in by the lifestyles of the Rich and Famous!  I am partial to mountains as the Rockies were a big part of my childhood. The views from the top of the Galena Summit were spectacular and the water in the Salmon River is clear and crisp. The temperatures were in the low 70s with a stiff breeze. Two moumtain peaks, Castle peak and Mount Borah still bears pristine white snow and that's the best way to view it! Incredible contrast to the blue in the skys and fluffy while clouds in passing. We had a picnic lunch in the Sawtooth National Recreation Area, enjoying our sandwiches by a creek. We headed back down the valleys, by the MacKay Reservoir and back to meet the Interstate at Blackfoot Idaho. Back down in the southern flats, the irrigated fields presented very green and lush. 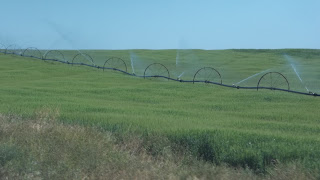 They grow a lot of contracted potatoes for french fries, Malt Barley for Coors Brewery and many fields of alfalfa, mowed and baled for the many dairies and other stock. It's a great open place. We will move on East sometime early this week after I get my mail and we get the coach looked at. Our turbo isn't boosting like it should and it makes for a slow tedious ride and I don't care to do that in the mountains and hills of Oregon that lie ahead!
Posted by mskayndan at 1:43 PM 2 comments:

Baking in the Desert!

﻿We're up to having daily Triple Digit temps here now. I say it's time to move on - and we would, however the body shop in Las Vegas still has our bumper! We had quite a trip coming back from Nebraska, I got a bug or some bad food and was sick for the whole second day of the trip. It was an absolutely miserable day and night! 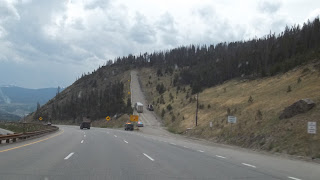 Much better now. The panoramic views of  the Mountains in Colorado were awesome, captured this runaway truck ramp for proof that they actually do get used! I have never witnessed that before.  The towering rock formations in Utah are massive and stately. 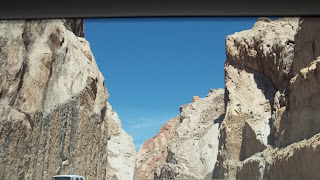 We headed into the city the next day to get the car looked at and pick up my new software for this computer. 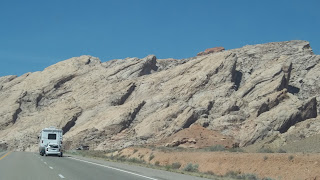 In getting the car estimated, they determined that they could just take the bumper off and work on it and we could still drive the car. Sounds good in a perfect world. I think if we were just driving in town and a short distance it would have been alright, however it didn't work so well, trying to drive up over the mountain at 65! 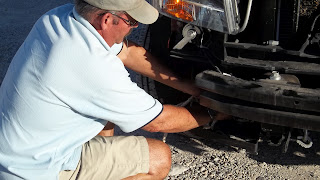 My wonderful DH ended up playing MacGyver along the side of a busy highway, securing the plastic tire lining with a screwdriver and a piece of rope. The rest of the 42 miles we drove 35 mph! It took a long time to get home. Tomorrow morning we will get up and leave here at first light and make the long trip before the traffic gets bad. Or the heat! I am getting used to my new computer, the new Windows 7 Operating System and the new Microsoft Office Home and Business Software. While I upgraded, I picked up a program tutorial set by Professor teaches. I took a college course to learn Microsoft XP and Office '97. I figured it was time for a refresher since I still know enough to get me through or get me in trouble. I have done a few lessons and if nothing else, it provides me something to do when it's hot out. 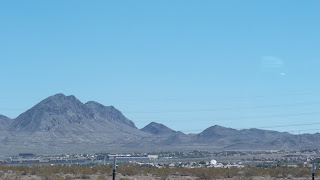 The wind is blowing again now, but just a breeze so far. When the wind blows in Las Vegas the strip and sky line doesn't look very pretty. We were out in the hills east of town and took pictures across the city. I think I like the Night Lights much better!  I must admit, I have a severe case of "hitch itch" and need to move on. Looking forward to sitting outside in some cooler temps soon. 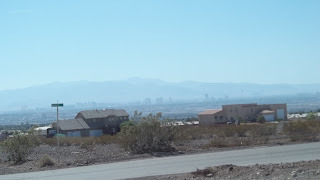 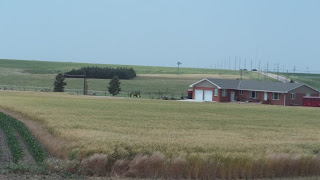 After spending time in Nebraska with friends and family, attending banquets, Memorial Services, Graduations and parties, it is time to head down the road again. I spread out the maps and books and planned a route for the summer. Having finished that, I felt that it was time to get the show on the road. However, we will take an unwanted pause. Yesterday we were tying up loose ends, and saying goodbye to the kids in their busy lives. I was headed for one more stop at our son's and a deer that could not tell time, decided to move across the highway at 1 o'clock in the afternoon and ruin my day! 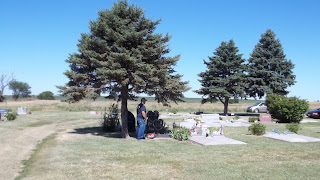 Not only ruin my day, but ruin the plan to hit the road! Lucky for my, it was a rather glancing blow, and the whole front of the vehicle wasn't smashed but just the bumper on one corner. A dent the size of a basketball, and scratches across is all that we can see with the naked eye. 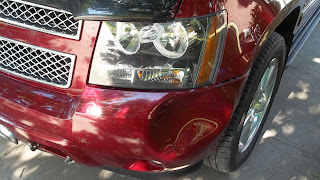 It didn't even break the headlight lens. Whew! I drove right to the dealership and had them check for leaking fluids, and unfortunately with it being Saturday afternoon, couldn't get a complete check and estimate for repairs. Thankfully it is still drivable and we continued on back to the County Sheriff's office where I spent another chunk of Saturday getting an accident report filed and calls made to the Insurance Company, well, left a message anyway, it's Saturday ya know. Monday I will head back and make arrangements to have the repairs. We may as well do it now, as we will be on the road most of the summer with no stops more than a week long until August. I will share some more pictures of our Memorial Service, my oldest son, a Veteran, pays respect to relatives that have passed on. Since he has been out of the Army, these services are more important to him. We were only a half hour late to the  event of the week, the 60th Anniversary party was for one of Danny's Gas Company crew. 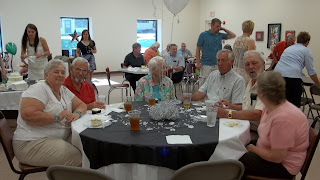 All these guys at the table worked and retired from the same office. This sweet girl is the youngest of our Musically Talented Family and she was getting ready for a Dance recital. I hope she had fun and did well, her mom purchased a cd that she will share with us later. 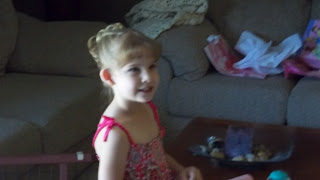 Technology is good and bad, that they wouldn't allow pictures and they sell professional pictures and a professional copy of the recital available to the parents to purchase.They even sold advance tickets and thinking we would be gone we didn't get tickets! Everything in life today comes with a price. Not even memories are available free anymore.
Posted by mskayndan at 10:37 AM 2 comments: