Another One Gone....But Not Forgotten!

Retro 2011 - A little reflection. We have been fortunate to have held on to our health for another year.

Brown's Great Adventure reached out across this vast nation of ours from coast to coast. We were able to put our feet in three great bodies of water. The Pacific Ocean at Carlsbad California, the Gulf of Mexico at Crystal Beach Texas. The Atlantic Ocean at Fernandina Beach Florida on Mother's Day.

We spent about 6 weeks in the state of Texas. My oh my that's a big state! The timing was so that we were able to set down and help a friend out that had become ill while working there. We got to visit with another friend that organized a Military Reunion for her Deceased Husbands Special Forces Unit in Savannah Georgia and fell in love with the pure Mistique of that City!

KayCee got to romp on the beaches in Cali and Texas and in the ocean for the very first time in Florida. We took an Airboat Ride and looked at Gators up a river by Titusville Florida, watched the spot where the last shuttle took off and landed after we were gone, and ate some fantastic Shrimp. When the time came to head back across the country, we stopped in several states along the way and while in Tennessee we visited the National Bird Dog Museum and the #2 Cracker Barrel restaurant.

#1 Burnt down!It was in the middle of the summer that we decided to stop through the center of Oklahoma and finally toured the Oklahoma City Bombing Memorial. We met an old Duffer....Duffy Martin that designed and built 5 golf courses after his stint on the Pro Tour. He is 95 and still a character. Unfortunately, while we were there it was 116 degrees and too hot for golf, or anything else for that matter. That area deserves some more exploration, minus the heat one day! Later in the summer, we headed the nose of our home on wheels to the north. We had one daughter give birth to a new Grandson and the other daughter get remarried, all in the span of a month, so we took a time out to visit with family and friends in the old home state. The fall came and we still had exploring to do! Off we went to the west. 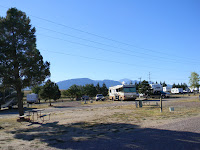 Sat through a 7" rainstorm south of Colorado Springs, and hit the road to see what New Mexico had to offer.

Plenty of time spent learning the customs of several Native American Tribes and drinking in the visions of many red bluffs.

The calm and the colors are awesome. We headed on west and stopped to check out what was behind the song lyrics, "Standin on the Corner in Winslow Arizona." Just fortunate enough to show up there during their annual fall music festival. A great photo opportunity and came away with some pretty cool gifts. While Winslow was a day trip, we actually stayed at the RV Park for the Meteor Crater, which was a good thing to stop and tour also. it's amazing how a piece of meteor and a huge hole in the ground can be so fascinating! Moving right along, Maintenance items to our coach came next when we rolled into Flagstaff, stopping there just for the day and then on to Williams for a couple days.

It is one of my favorite places in Arizona. They are 60 miles from the Grand Canyon, located in the hills, higher in elevation makes it a cooler place too. They also are building a new attraction called "Bearizona" which was a good place for me to get a "Bear" fix. That place is gonna be pure awesome when they are done. It was a great breather after all the extreme heat and humidity that we experienced all summer, and then dropped down into the desert once more, arriving in Quartzsite before heading the nose south one more time into Yuma. It was 106 degrees that afternoon! Welcome home again! Whooowie! Thank god for Airconditioning! They don't call me Foofy for nothing!~ We spent a lot of time trying to avoid the Natural Disasters that occured here this year. Skirted around the fires, floods and tornadoes. Some things we missed due to these events. Hope we will catch them another year. Our lot here in The Palms RV Resort was secured to us and so we decided to set up and drive back to Nebraska for DH and hunting of the Pheasants. 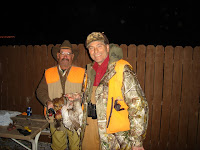 He was about to hunt in Nebraska and two other planned trips to South Dakota and one to Colorado. 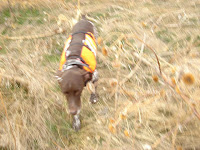 She really likes this..and works hard. We had family time at Thanksgiving and I was able to celebrate and attend my youngest son's new band "Whiskey Richard" performing in two cities in Nebraska. 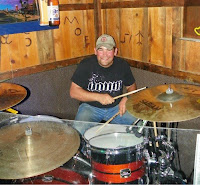 That was my great fun. I'm their biggest Groupie!

Our friend has regained his strength after his ilnesses

His crew wouldn't be complete without two of the cutest shih tsus around! Sammy and Sadie

and so.....The adventure continues. Now we hang out, bask in the sun and take advantage of this great desert weather to stay out of the extremes in the other parts of the country. Not bad....I think we'll keep on keepin' on...... I'm looking forward to a great 2012. Already starting to plan next years route! Stay tuned and have a very Blessed New Year.

We are back in Arizona! It has taken me all week to get situated and back into this time zone.

Now we are in Mountain time but my body clock isn't cooperating and I'm getting up mighty early still. We have done quite a bit of driving around the area,watching the produce harvest in full swing.

The irrigation process is much different here. The newly worked fields are soaked down before they are planted.

Truckloads of the harvested produce make their way to the cooling plants along Interstate 8.

Things break in threes! It's hard to believe, you shut everything off and up and things just go bad and break without use, but it happens. For a minute or two, we thought the door latch was broken again like this fall at Oakley Kansas, but come to find out, the neighbor had locked the wrong lock. Whew! The 2 big coach batteries were dead and the living room slide wouldn't go out. That was cured with a trip to Interstate Batteries and $300.00. While unloading the car, the back hatch of the car stayed up, and then closed itself.

Then wouldn't open again. Finally it reset itself. Another Whew! Then when the Dish DVR was reinstalled...it wouldn't work. Either the bedroom would work or the one in the front.. and the message was... Fatal Hard Disk Error. Not good! Afer a couple of calls to Customer Service Tech Support, it was determined that the Receiver was toast! They sent us out a new one and three days later, we have TV in both the front and the bedroom! Lost was all the shows and movies we had saved for a rainy day, but oh well, at least we have the noise box back again. We had to repack the old one and mail it back to them using Fed Ex Return. It took us a couple days to get the coach readjusted and things back in working order. Today we made our way into Michaels Craft Store for me to pick up some beading supplies. Shoppers and parking lots are chaotic, but for the most part people are being patient and curteous. I won't be going out of the Resort now until Monday! 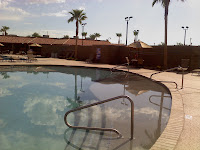 The weather is sunny but not warm and we had quite a bit of wind yesterday and today. Not shorts and sunbathing weather! The greatest part of the staff here got off at noon today, and things are going to quiet down until after Christmas. Our trek across the country happened just in time before a couple of nasty Winter blizzards made their way across where our path would have been and we avoided being miserably stranded or in the way. Glad we left when we did. We drove in some rain and heavy clouds shrouding Picacho Peak between Tucson and Casa Grande. DH's favorite peak!

I will start out the Christmas Eve holiday tomorrow by chopping up some vegetables and putting on a pot of soup. Then we will walk and bask in the sunshine in the afternoon. We have a Christmas Eve service in the Ballroom tomorrow evening. I wish all my Blog readers, friends and family a very Merry Christmas! I wish I could tell you that we are basking in warm sunshine...but it's just not the case. It's down right chilly!

KayCee is being her usual evening stink weed self, and so I am being summoned and need to spend some quality time with my fur kid. She got to experience the wind in her ears for a minute while we were riding around looking at the crops. Have a wonderful Christmas Eve and Christmas Day!
Posted by mskayndan at 6:55 PM 1 comment:

Winter Wonderland on the Plains

The pictures of sunrise and snow are fantastic this time of year. 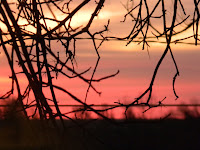 I have some pretty awesome views at 6 am. We have our first measurable snowfall. It snowed here most of the day Saturday leaving us with about 5 inches total. The wind was minimal and so it fell pretty even. 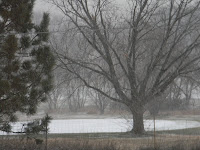 What I can't handle at this point is the cold that came along with it! As it was coming to an end, DH couldn't hardly contain himself and fired up the snow blower to clear our sidewalks and driveway. 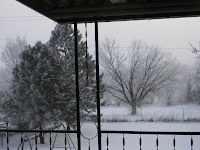 It started right up, even after no use for two years! Sunday morning he loaded up KayCee and took off to meet some buddies in South Dakota for some serious Pheasant Hunting. 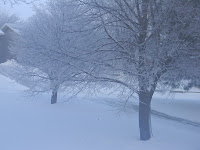 I went out to clean off my car and the maintainer came up the street and buried the top of the driveway, so I got my scoop and scooped that out so that it didn't melt a little and become hard. 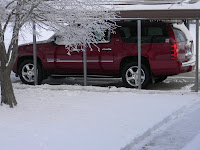 Better than lifting weights! So was planning on sitting around moping by myself and hibernating to keep warm, when a friend called and needed help with data entry for an auction, so off I went and spent the afternoon doing that! A nice break and diversion from missing my family! 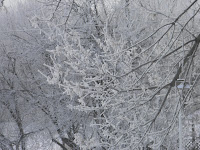 Today I have spent some serious recliner time covered up with my double fleece blanket! It will dip down in the single digits tonight, with not much relief for a few days. The word from the weatherman tonight is temps of -5 for tonight. Brrr. I wanted to share some of these pictures with you all that miss this winter white stuff! ha ha ha ha or to remind ya of why you stay away from it! I know I'm going to appreciate the warm Arizona sunshine a whole lot!
Posted by mskayndan at 4:43 PM No comments: