This crew doesn't really need an excuse to gather, and most days there's a group of chairs sitting in front of one motorhome or another right here in the middle of the block. 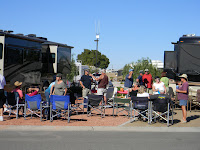 They either coffee or have Happy Hour and try to solve the problems of the world. Well, this time it was a couple's 41 Wedding Anniversary and the guys got together an organized a formal "Block Party/BarBQue" in their honor! So far this week both has been sick with the flu, and we were holding our breaths that they would make it, and they both did. 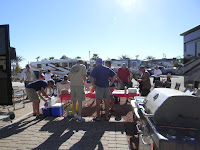 We had lots of wind yesterday, so the other breath holding was for a nice day! It was, and it all came together very nicely. DH collected a little money from all..then he and Jim went to Sams and got supplies. They made the marinade and started the Beer/Pepper/Onion Brats soaking yesterday. 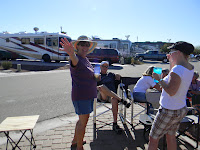 I put the cole slaw together this morning and the rest just fell into place. Turned out to be a very good meal, and a good time was had by all... 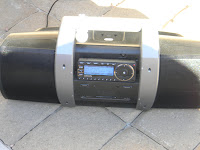 we had Marita's Sirius Boom Box - Led Zepplins "Immigrant Song" - while The Marine Corp Air Station provided us with a 4 copter Fly over while we sat out and enjoyed the afternoon. 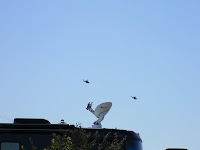 I think we ended up with 45 people and one staff from the resort came and joined in. While this park is made up largely of Canadians...we were represented by Missouri, Montana, Kansas, Nebraska and South Dakota today. 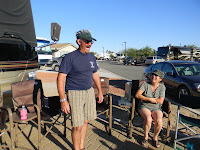 DH is having a blast here.
Posted by mskayndan at 9:00 PM