We spent a few very interesting hours taking a tour of the Marine Corp Air Station this week. About three times a year during the winter months the Marines invite the public to tour their facility and look at their operations and equipment. 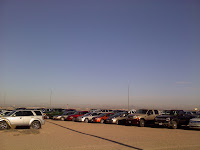 We drove through gate 8 and a couple miles down the road we came to a big parking lot where we waited for the next available tour bus. An absolutely beautiful morning, we were able to watch some jets taking off and landing. It was 9 a.m. and a few tour busses had already left for the tour, it appeared as if it was in full swing! They only offer the tours from 9 - 10:30 in the morning. Our tour guide was Lance Corporal - soon to be Corporal, Jakob Schulz from Chicago. 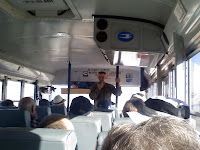 He works in PR for the Air Station, writes stories for the Station's paper, The Desert Warrior and he is being deployed to Afghanistan in March. Our driving tour took us past several sets of Barracks, the Physical Training facility, a couple of simulators that trains the marines for a vehicle roll over. 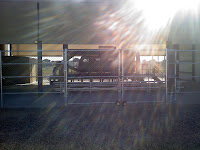 They looked like a carnival ride! We continued on past the Ceremonial field, where there was an actual Ceremony taking place, a changing of the guard or some such thing. 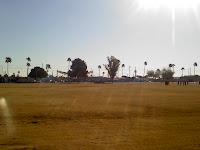 The drum and bugle corp, dressed in red were practicing also on another outside field. 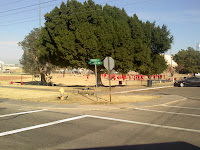 The base reminds me of the Ft. Carson Army Post at Colorado Springs, a city within a city, they can operate fully without leaving the base for months at a time. They provide housing barracks for single soldiers, and houses for married soldiers and familys. Recreational Facilities and all of their training and equipment buildings. We arrived at the main Aviation building where we disembarked from the bus and were led through the doors and out onto the main tarmac. 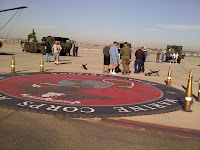 On display there were several pieces of support equipment. A rescue helicopter, a Harrier Jet and it's pilot, a tiger jet an ambulance and several different weapons. 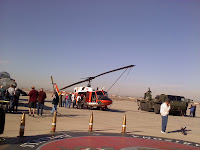 We see these helicopters flying over our park all the time and the jets are always practicing formations, take offs and landings right over the middle of town. Yes they are noisy, and that day we learned that we now have a bigger F35C jet here and it's even more noisy....but it's a good noisy because they are learning to keep us safe. It's awesome to be able to watch them every day and was fantastic to be able to see them up close. 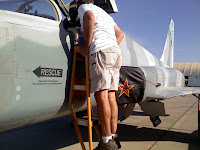 The Military Police unit were there with their dogs that they use for search and subduing criminals. One had actually been deployed overseas. These demonstrations were awesome, and I would never want to be taken down by those dogs. They hit really hard. Several interesting facts about the base. 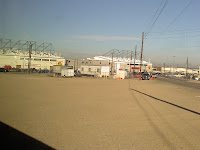 The 214 Blacksheep Squadron that is based there was depicted in the movie "Top Gun." The 211 Avengers, a Marine Attack Squadron earned the nickname of "Wake" due to its heroic defense of the Wake Island(Japan) in December 1941. Tiger jets are used as decoys for the bigger performance jets. 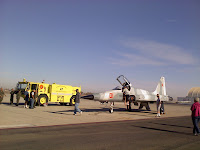 The smaller camo jet that folks climbed on was a tiger jet. 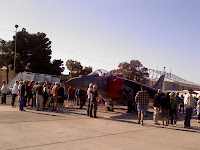 The pilot of the Harrier jet told some pretty incredible stories of his experiences and I could have listened to him for a lot longer. There is only 6 bolts that hold the wings on a Harrier Jet.That makes loading and assembling quicker and easier. The one big Airstrip here is 3 miles long. It makes Yuma third in line to receive a shuttle landing if Florida and California doesn't work. The next time that the gates will be open is March 26th for the annual Air Show, and I will be at that for sure. Lots of people parked across 32street and were taking advantage of a great photo opportunity that day....I'm sure they got some awesome pictures. I didn't even take my big camera, thinking they wouldn't allow pics...so these were taken with my phone. Next time I will know better and will get good ones!The skies are alive again today, and just as I am writing this, two great big copters circled over head. I couldn't even get my camera out quick enough, but I'm sure I'll get more opportunities.
Posted by mskayndan at 1:33 PM